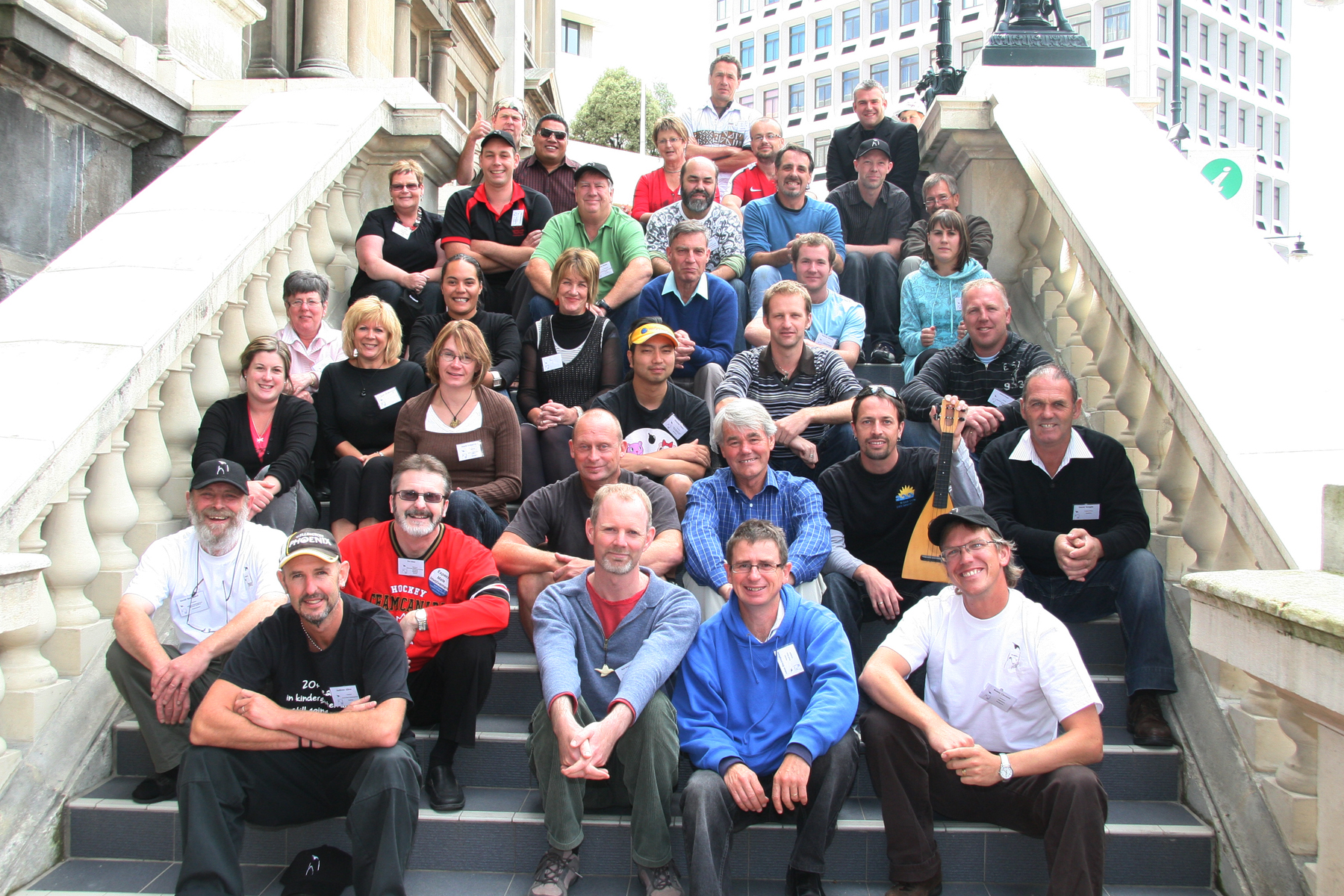 What a weekend! An incredibly positive and affirming time was had by all the attendees at the Third Annual Summit of Aotearoa/ New Zealand’s network of men in early childhood education.

Men and women from across the country gathered together to share their stories, make new friends and plan strategies for bringing more men into the lives of our youngest tamariki. More than a few laughs were had as well, not only during the engaging presentations and frequent kai breaks, but at the informal get-togethers in some of the many hospitality establishments around Dunedin’s iconic Octagon.

A beautiful Mihi Whakatau from Komene and Paulette and whanau set the scene, and was especially impressive for our visiting keynote, Ron Blatz from Winnipeg in Canada.

Our President extroadinaire, Russell Ballantyne of Early Childhood on Stafford in Dunedin, then got us all going with a warm and extremely amusing welcome to delegates and speakers, and presented his annual report. We have finally been granted ‘charitable’ status after a long bureaucratic process, are a fully incorporated society, and can now look ahead to establishing a long term plan for financial stability so our valuable work can continue. Russell paid particular tribute to the many women who were attending, and whose perspectives and contributions over the Summit proved invaluable.

There was a lot of passion in the Skeggs room of the Dunedin Mayoral Chambers that day, for the open discussion forum that followed was most animated and covered subjects such as supporting male students through training, success stories from around the country and the world, and our relationship with Teach NZ and the Ministry of Education. There were also tales of tough times, of rejection and lack of understanding from parents and occasionally even colleagues. Sobering stuff, but it underlined yet again the value and importance of why we were there.

Professor Helen May, an early childhood pioneer in her own right, then took us on an amazing journey that followed the development of our modern idea of ECE through the ages. She very eloquently showed us the role of men as teachers and theorists, many that were described in their times as dangerous heretics, revolutionary madmen and traitors! Often the development of these ideas was played out against a backdrop of religious and social upheaval.

Helen spoke of an amazing cast of characters, from the Czech Joan Amos Comenius in the 16th century (who spent much of his life on the run from authorities), Englishman Thomas Coram, Johann Pestalozzi, Friedrich Froebel the founder of the Kindergarten movement, John Dewey, Maria Montessori and many others too numerous to mention here. She also gave us an insight to the (often bitter) fight for recognition and respect in Aotearoa during the 1970s and 80s. Personally, it reinforced the respect I have for the pioneers in all aspects of ECE in Aotearoa that have paved the way for the teachers of today.

After a fantastic lunch and more networking we were lucky to be joined by a very witty and engaging speaker in the form of Richard Walley, Senior Policy Manager at the Ministry of Education in Wellington. Richard explained the new government’s manifesto on ECE and its implications for the sector. He also provided us with some mind blowing statistics and good looking graphs (like me, he likes graphs). He pointed out that (because of a sudden surge in birth rates) to maintain current rates of participation and to bring Maori and Pacific participation rates up to the same level by 2012 we are going to need 19,000 more child places. 19,000! That’s 400 more centres! Where are we going to get the extra teachers, for a start? Obviously we used this opportunity to point out to him that half the population (males) didn’t seem to be being targeted for teacher training recruitment, and maybe that was a good place to begin. Richard was a very good sport and was very popular during the breaks.

Then our overseas star Ron Blatz took the stage. Ron is the director of the Discovery Children’s Centre in Winnipeg, Canada, and has single handedly turned them into a national leader in engaging men in teaching and learning alongside young children.

He spoke extensively of their strategies, from targeted advertising, ‘apprenticeship’ schemes, the positive mentoring offered to male students and teachers to reduce feelings of isolation and improve retention and graduation rates, the importance of cultural contexts, and the way the physical environment of a centre can affect a male teacher’s feeling of belonging. He spoke of men being natural ‘risk takers’ and the clash of ideas that this sometimes brings with other members of the team. The apprenticeship scheme in particular caught my eye, the basic idea being a two year work experience plan for men new to the sector, after which their studies toward qualification are fast tracked.

Ron very kindly presented the EC-MENz network with an Inuit ‘Inukshuk’ figure. These amazing (often huge) rock markers in the shape of a standing human are traditionally built as navigation aids in the often desolate snowy landscape of northern Canada. He asked us to act as Inukshuks, markers for others in the field who may need guidance on their sometimes lonely journeys. Ron got a huge round of applause from an appreciative crowd.

The Annual General Meeting followed, with the standing committee voted back in and new members appointed. In true ECMENz style the whole thing took under 20 minutes!

After a marvellous night of dinner and discussion the Sunday morning saw us gathered together to discuss positive action plans for the future, in particular ways in which we can encourage early childhood services to become more male friendly. The suggestions came thick and fast, from curriculum planning to the physical environment, from having more construction-type materials in the playground to recognising that leaving the seat up is not the end of the world.

All the attendees at this amazing event shared a real sense of purpose and determination, and I encourage all of you to join us on our journey to help our teaching base better reflect the communities we serve.

Please log on to ecmenz.org to discover more, including local area network meetings, new initiatives and an ongoing discussion forum that harnesses the knowledge and talents of teachers around the country.

For the full report click on this link  Summit-2009