It’s been seven years working at Kids’ Domain Early Learning Centre in Auckland, New Zealand. I have spent three years to qualify in New Zealand as an early childhood educator.

I’m originally from Japan. I have been living in Auckland for 10 years. I like the relaxed life style in New Zealand. And I like working with infants and toddlers here too.

Although it is not common to be an early childhood teacher in Japan, it’s an even more unusual job for a male. I have parents who have a traditional way of thinking. It means that all children follow their foot steps. In my case, my dad was a carpenter. I was supposed to be a carpenter like him. However many people in Japan started changing traditional way of thinking in general. Younger generation has more freedom of choice.

Life in Japan was not my style at all. Everybody works hard to get on the track. Society pushes young ones to go college and then get a good job, then get married.

Instead I would like to see the world. So I have travelled a few countries by myself. Eventually I settled in New Zealand.

When I started thinking about living in New Zealand, I decided to get qualification in New Zealand. What do I study? I always wanted to study psychology. And I was interested in how a child grows emotionally, physically and socially, when I looked after some children years ago. So I decided to study early childhood education.

In general I had never thought it would be hard to be a male teacher. I was lucky to have a great team in my work place and support from the school too. Also all my friends were always supportive. Therefore I have never had a hard time because of I’m a male teacher.

Still I think that my parents did not like the idea of being an early childhood teacher in New Zealand.

Now it’s been seven years, I feel glad that I made a choice to be an early childhood teacher. And I still like to work with children and their families. 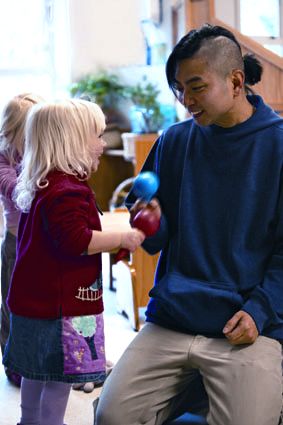