Mr Buckingham says a significant number of Kiwis also don’t have regular contact with a father figure.
The Totaravale resident says not enough is done to encourage men to pursue early childhood teaching.
“If you go to a playground you’ll see dads playing with their children but if you go to a preschool there’s no men.”
Fathers feel more comfortable spending time with their child at a centre where there are male teachers, he says.
But Early Childhood and Regional Education senior manager Richard Walley says it’s the effectiveness of the teaching, not gender, that’s important.
“It is likely that the small proportion of men teaching in early childcare education services reflects the broader attitudes of society.
“The government is seeking to raise the status of teaching in general and that could attract more men into the teaching profession as a whole.”

Mr Walley says TeachNZ’s key role in promoting teaching careers involves distributing material that includes personal stories about male and female early childhood teachers.
Mr Buckingham was recently involved in a national men in early childhood network EC-menz summit which was attended by 75 men and women at AUT University’s Akoranga campus.
He says low salaries and fears of being accused of abuse are among reasons why a lot of men don’t consider becoming early childhood teachers.
He says he started teaching after being poisoned by methobromide in a trucking accident 10 years ago.
During his six months of recovery he decided to do “something for the community” spurred by his enjoyment of “extending children’s interests”.
He says male “rough and tumble” is important for children’s development along with the more nurturing qualities that women bring to teaching. 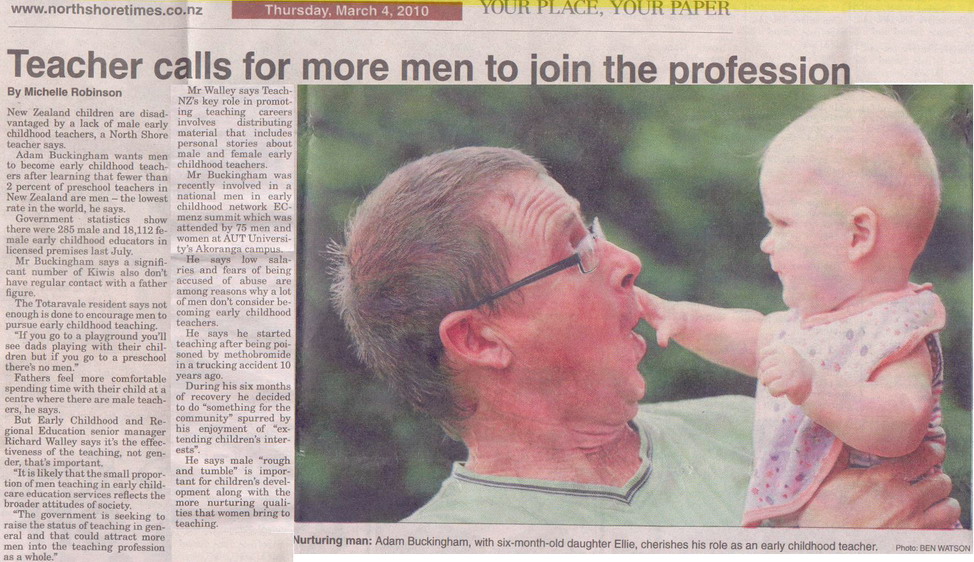